The ad is very well done and worth watchinng 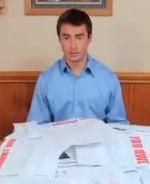 On Tuesday, NumbersUSA will launch a national TV ad in cable network news coverage of the Republican National Convention and of next week’s Democratic National Convention. The TV ad calls attention to the high unemployment rate of America’s recent college graduates and asks why our government will admit another million immigrant workers next year despite the low percentage of recent college grads finding a job in their field or at all. The TV ad will air on several networks including MSNBC, CNN and FOX News Channel.

About 1.5 million or 53.6% of American bachelor’s degree holders under the age of twenty-five were jobless or underemployed last year according to a recent Associated Press report. At the same time, the U.S. government has continued to admit more than one million legal immigrants a year to take jobs in places like Tampa, Florida and Charlotte, North Carolina.

Both political parties have had a tin ear to the plight of America’s kids — and their parents — who have gone to the effort and expense to gain a college education but encountered an economy unable to use them,” commented Roy Beck, President of NumbersUSA, a non-partisan grassroots organization with more than 1.3 million participants. “The job picture is even worse for young Americans with only a high school degree. The last thing our graduates need right now is more job competition.”

Beck said he is pleased that some politicians this year have pledged to increase immigration enforcement to reduce the number of illegal immigrants taking U.S. jobs sought by unemployed Americans. But the greater job threat to most Americans is the government’s program that automatically gives out around one million permanent work permits to new immigrants each year, he said.